How Dussehra is celebrated in Bastar

Celebrated for 75 days (with the 10 days of Navratri being the most important), Bastar’s Dussehra is one of the longest festivals in the world. And this is just one of the unique facts you will discover about the fascinating world of Bastar tribal culture, a composite whole comprising tribal groups such as Gonds, Marias, Murias, Abhujmarias and Bhattras.

While most of India marks the triumphant return of Lord Rama to Ayodhya, after defeating the demon king Ravana, Dussehra in Bastar has nothing to do with it. Rather, the festival celebrates Danteshwari Mai, his tutelary deity and his reunion with the â€œelder sisterâ€ Maoli Devi and her other sisters.

In fact, Bastar Dussehra is primarily a festival of deities rather than men, with local tribal deities from all parts of the district coming together to pay homage to Danteshwari Mai in an explosion of symbolic rituals and impressive reverence. . The whole festival is an astonishing amalgamation of local religious beliefs and tribal customs.

Danteshwari is the ruling deity, but tribal communities also worship their own gods and goddesses, inspired by nature in its myriad forms. Located at the confluence of the Sankhani and Dankhani rivers, the town of Dantewada is home to the 14th century temple of the goddess Danteshwari. Bastar’s royal family plays an important role in organizing the Dussehra festivities. The celebrations take place at the Danteshwari Temple in Jagdalpur, located near the Bastar Palace.

Although Bastar holds many festivities throughout the year, the Bastar Dussehra Festival is neither a folk festival nor a harvest festival; it is rather the sovereign feast of worship and cheerfulness in the culture of Bastar. This tribal pageantry features some of the world’s most unique religious rituals and festivities that have been practiced for many centuries.

Preparations for Bastar Dussehra begin with the Black Fortnight or Waning Moon (Krishna Paksh) in the month of Shravan in the Hindu calendar, which falls somewhere around the end of July; the celebrations continue until the 13th day of the waxing moon (Shukla paksh) of the month of Ashwin (around October).

In anticipation of the Dussehra festival, a series of rituals, including sacrifices, processions, etc., are carried out during 12 main events observed during these 75 days.

Most ritual duties are assigned to specific communities, villages or families and individuals of certain specific lineages or tribes. 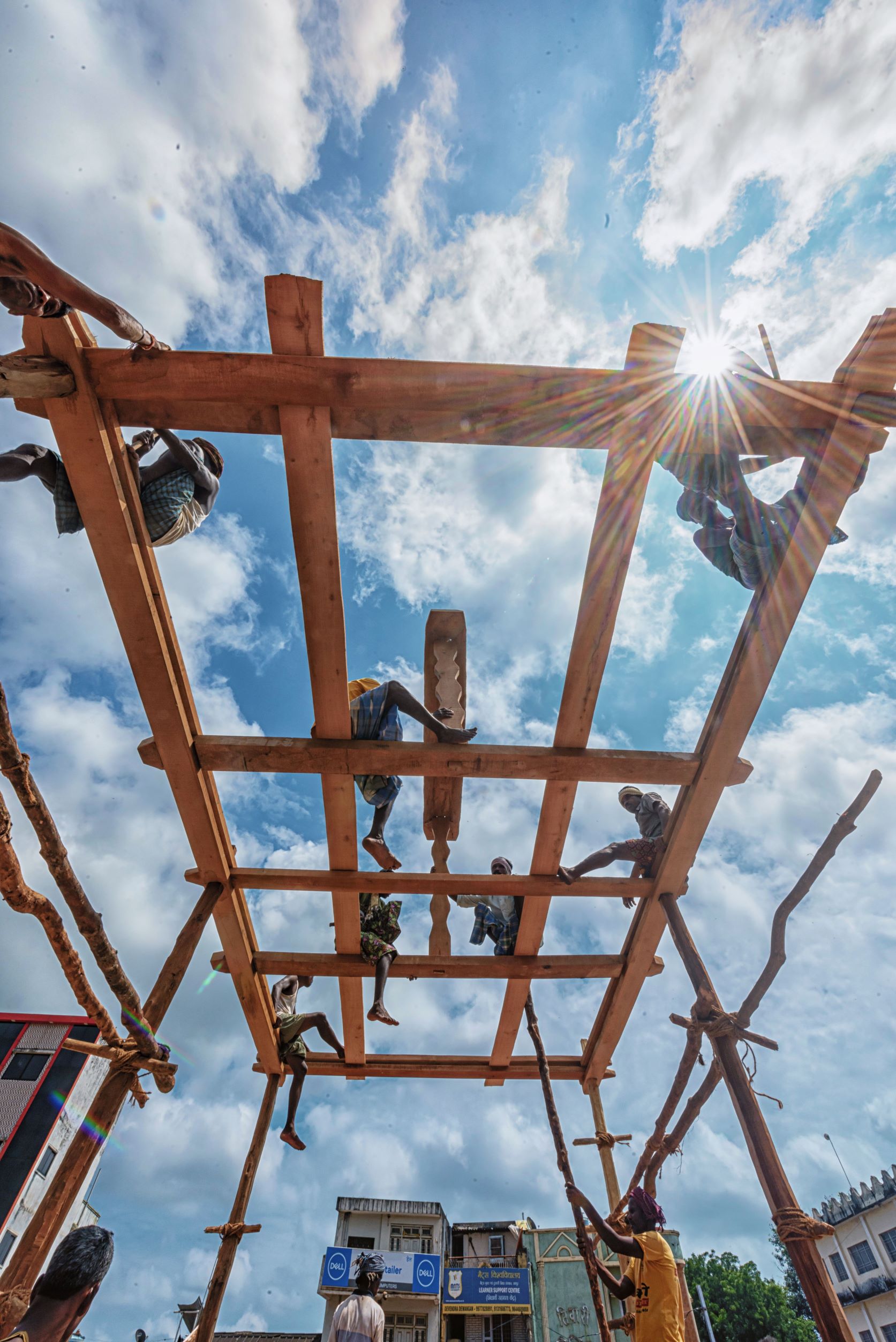 For example, to build the two-tier chariot, the carpenters come from the village of Beda Umargaon; the massive ropes are wound by the tribes of the villages of Karanji, Kesarpal and Sonabal; the smaller chariot is pulled by the youth of Kachorapati and Agarwara parganas; the largest chariot is pulled by the buffalo horn Mariasof Killepal. Singing hymns at all rituals is the prerogative of the Mundas of the village of Potanar.

By tradition, many other native tribal deities congregate at Danteshwari Devi shrine in Dantewada, then travel with the goddess in her palki to Jagdalapur for the remaining festivities. Led by the dance of the Bison Horn Marias, the procession is welcomed in many villages by troops from indigenous communities along the route.

The celebrations begin at the Kacchin Gadi temple, where a young girl from the Mirgin community (weaver) is placed on a swing of thorns. It is believed that Danteshwari’s spirit, which enters her, prevents her from hurting herself. The Bastar Raja then approaches her in all humility and asks her if the celebrations can begin.

A stern austerity ritual, it involves a young Halba tribal staying inside a fasting pit for nine days, to ensure the festivities run smoothly. 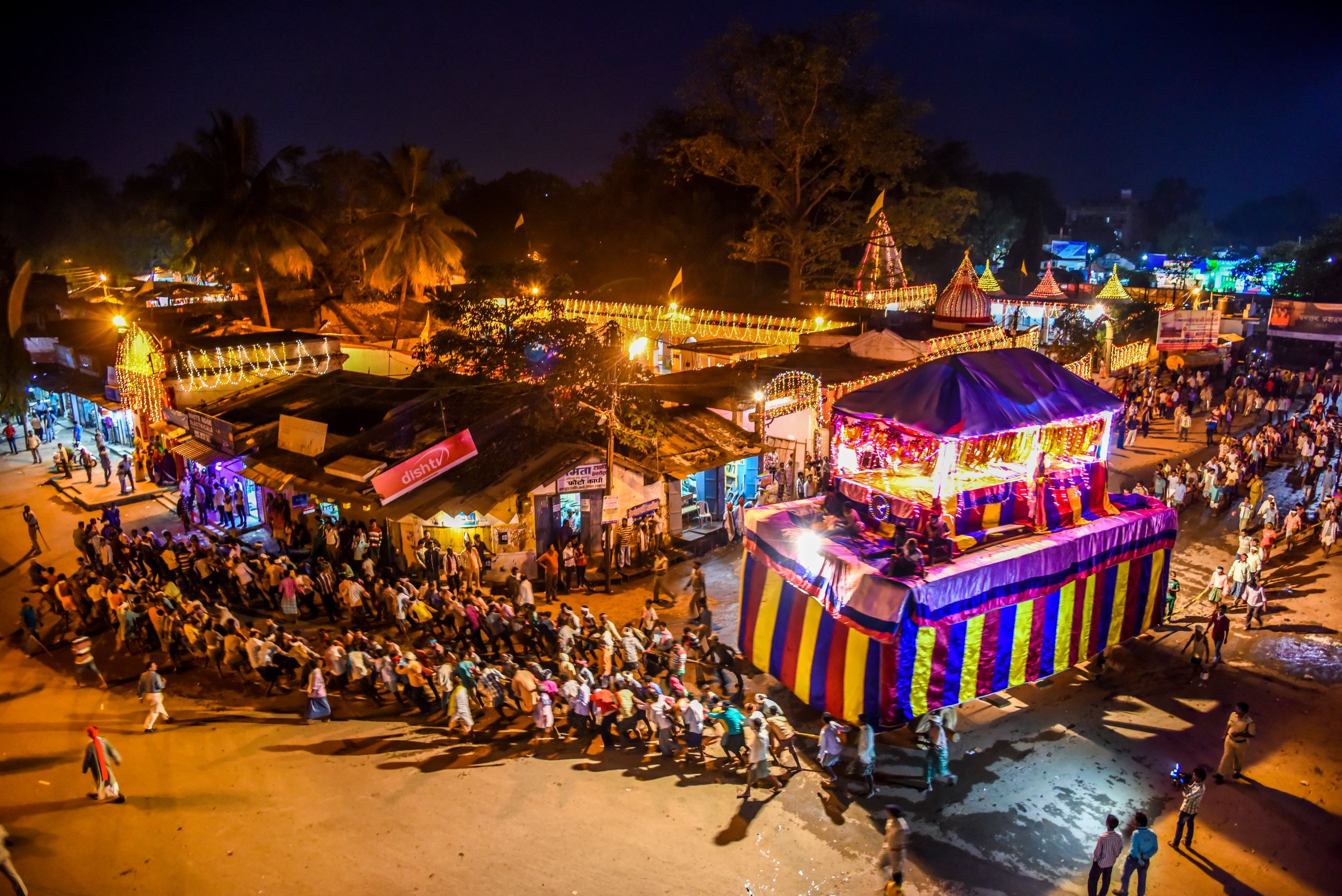 The rath yatra starts on Ashwin Shukla Paksha Dwitiya To Saptami Tithi. During this period, the floats regularly went out in procession throughout the city.

Maoli Devi arrives from Dantewada to Jagdalpur in a doli attend Dussehra after receiving an invitation, mostly led by members of the royal family.

During a midnight blackout in the city, the chariot is stolen from the temple and hidden outside the city at a place called Kumdakot. About 3000 guardian deities of Chhattisgarh, Odisha, Maharashtra and Telangana gather around the chariot.

On the thirteenth day of the bright moon in the month of Ashwin, a farewell ceremony is held for deities from different parts of Bastar who attended the festivities.

As part of this year’s celebrations, a Devi Mandai is being organized. Visitors will also get a glimpse of Bastariya Madai. The Mandai Mela, an integral part of the rural culture of Bastar, will be held in Jagdalpur. However, it will be a limited and straightforward affair and will follow all standards of sanitization and social distancing.